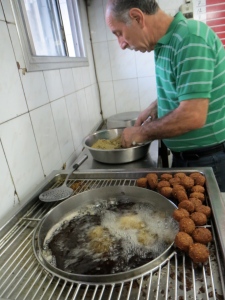 If you think Israeli food begins and ends with falafel and tehini dip, think again. Most people don’t consider Israel a foodie nation but in the last decade, their incredible agricultural bounty, internationally trained chefs and maturing wine industry have put this tiny nation on the culinary map.

1.Uri Buri in Akko. We were told to visit this ancient city filled for its roman ruins, ancient seawall and other layers of historical significance as well as for Uri Buri, a magnificent seafood restaurant.  Dutifully, we wandered the ancient streets, arriving at Uri Buri mere minutes before sunset. We got a spectacular window seat to watch the sky light up. But the view inside was equally inspiring. We had fish of every description and preparation over five courses, each interspersed with a refreshing and different fresh sorbet to cleanse our palates. Tempt yourself by checking out their cookbook.

2. Sinta Bar in Haifa/Carmel. This restaurant in the Carmel Hills above Haifa could have been a San Francisco eatery. The sophisticated presentation of meat, fish and appetizer courses was exceeded only by the  ornate pastry confections that ended our meal. What’s different from S.F. is that Sinta Bar, like so many Israeli eateries, served these gorgeous preparations on beautiful dishware that are served on plain, diner style tables with nary a tablecloth to be seen.

3.Machneyuda in Jerusalem. We were warned to get reservations for this hot spot (#1 on TripAdvisor) just outside Jerusalem’s unbelievable farmer’s market called Machane Yehuda where the most spectacular bounty of Middle Eastern fare was available from the freshest vegetables to arrays of dates and figs and exotic spices. (We bought a bag of our favorite new spice “Za’atar” that would cost a fortune to buy in the states but cost us all of $3. But I digress. The restaurant Machneyuda is lively cafe with an open kitchen and friendly bar specializing in wickedly inventive dishes prepared from the latest market bounty. We had several small plates  and lots of wine to wash it down.

4.Onami in Jerusalem. Who goes to Israel for sushi? Apparently, we did! Recommended by an Israeli colleague, we dined on fresh sushi and a wonderful seafood noodle dish that included tender calamari…an ingredient we were surprised to find in Israel but which is wonderfully fresh and sweet from the Mediterranean.

Of course, there were many other excellent restaurants along the way (Ex. Haj Kahil in Jaffe/Yafo was remarkable)  but these were my top faves.  But wait, I promised you five and here’s the fifth.

5. Falafel Ha Ezkenim in Haifa.The best falafel of our whole trip. And we tasted many. This little hole in the wall in the Arab wadi area of Haifa (walking distance from our charming B&B in the German Colony) is well worth wandering out of your comfort zone. We walked the narrow streets and knew we  found the place when the proprietor thrust a fresh ball at us for an immediate taste hit. The falafel were gravity-defyingly light and surrounded by fresh veggies, pickles and tahini sauce in a freshly cut pita bread. Ahhh…. It was a lesson in the perfection of the simple.

And by the way, Israel’s wine industry is flourishing and earning accolades. We drank wonderful chardonnays and pinots from the Golan Heights as well as other wine regions. Forget Manischewitz. Israelis are not just people of the book anymore, they are people of the vine. More on this in another post.

For those who want to eat Israeli without flying 9000 miles, there’s a gorgeous new cookbook called Jerusalem by London’s uber chef Ottolenghi that showcases the culinary creativity that’s flourishing all over Israel. New takes on traditional ingredients and dishes.

Finally, I don’t want to leave you hanging about the “toothpick course.” Everywhere we went from casual cafe to fine dining, we were served a tumbler or glass filled with toothpicks before dessert or the check appeared.  Apparently, it is tradition to cleanse your gums in public here unlike the states where you grab a pick on the way out and furtively poke your molars in private. Though offered, we continued to follow toothpick etiquette American-style! Bitayavon! 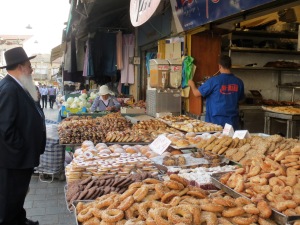