Tales from the Road: Listening to Klezmer in the Ghetto

One of the motifs our of Bologna stay besides indulging in vast gluttony was discovering the Jewish ghetto area. We spent some our first day wandering the maze of  medieval alleys where we thought the ghetto was. But, alas, we found nothing. Why? Because Google really sucks at navigation in medieval cities.

That night we researched the ghetto more deeply seeking locational guidance and history from local sources.From Bologna Welcome: “The layout of Bologna’s 16th century ghetto can still be precisely traced amid the narrow streets in the medieval heart of the city: here, a maze of alleys, covered bridges and small windows tells the story of a whole community forced to live in a specific area of the town by order of the Papal State beginning from 1556.

In Bologna, Jews lived in the ghetto until 1569, when they were expelled for the first time.In 1586, they were allowed to come back to town and lived here again until 1593, year of their final expulsion: 900 people left Bologna and no Jewish community was allowed into town for more than two centuries. ”

The Jewish ghetto was, of course, located in the shadow of the church so they could keep an eye on the community. The trouble for us is that Bologna is littered with churches!

The better locational cue we discovered the next day came when we walked to the “fraternal twin towers” in the center of the city then headed under an arch on Via Zamboni. When we found a street named Purgatorio, it was no surprise to us that that was where the Jews were sequestered.

It also helped that walking from this direction,  signs for the Ghetto Ebraico were now clearly marked with the hamsa (hand) symbol and easily noted. It being Saturday, the Museo Ebraico in the heart of the ghetto was closed. However, we learned that this very  Saturday night was the first in a series of Jewish Jazz concerts at the Museo and we wanted to experience it. We were now fully equipped to navigate our way back.

After a fresh grilled fish dinner at the local’s fave Il Saraceno, we wandered back to the ghetto along its narrow, quiet streets. Arriving just a few minutes before start time we were amazed–and daunted– to discover a long line waiting at the gate. About 250 people had the same as idea as us.

At nine, the  gate opened to a stone courtyard and somehow we all fit. We stood near the back. And then we waited. And waited.

My claustrophobic thoughts during the wait flitted to what it might have like being corralled in this quarter as a medieval Jew. And then I reflected on all the tragic Jewish ghettoes of the twentieth century. Then, my thoughts meandered to more modern terrors. I wished the few police stationed nearby had inspected our bags and persons as we filed into this crowded gallery. There were no inspections.

Finally, my thoughts drifted to the amazing human migration occurring right now in neighboring countries. The refugees from war and privation in Syria and other conflicts were walking across Hungary to Austria and Germany by the thousands. And they were welcomed! Different times for sure.

Suddenly the music began. Lively uptempo klezmer interpretations of Kurt Weill filled the night air with joy, creativity and life. Couples cuddled in the tight quarters, enjoying a free concert and community. The musicianship of the Gabriele Coen Quintet was engaging with their modern touches of tapping, slapping and funk to Weill’s classic works.

Filled with music, we wended our way home passing piazzas filled with other night musicians playing under the stars. This city loves music.

Today, the Ghetto Ebraico is a place of art and culture for the city of Bologna. Yet, still, the echoes of history can be heard if you listen to 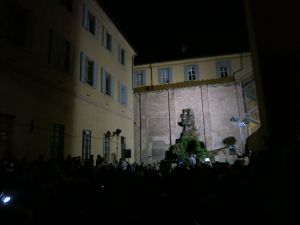 The ghetto of Bologna

For more details about this area:http://www.bolognawelcome.com/en/places-to-see/suggested-itineraries/params/Percorso_6/Luoghi_331/ref/The%20former%20Jewish%20ghetto